Leave a comment
By yearoffunsarah Fun for Couples, Solitary Fun

I had planned to go out for a drink after a two-show day at work. But, as is wont to happen, I was extremely tired when I got home and not interested in going anywhere. The plan was for my husband and I to go meet one of his friends in from L.A. so he just went without me and I decided to watch a Halloween movie from my childhood: Hocus Pocus.

This 1993 classic stars Bette Midler, Sarah Jessica Parker and Kathy Najimy as the Sanderson sisters, three witches who were hung during the Salem witch trials when they were discovered sucking the life out of children to remain young themselves. However upon their death, they vowed to return and seek their revenge upon Salem when a virgin lights the candle in their old house, which is, in the present, a museum. The candle gets lit by a California cool guy new to Salem trying to impress the pretty girl. The sisters come back and are perplexed by modern life, things like the city bus, television and Halloween costumes. Meanwhile, with the help of a 300 year old talking cat (he is really a boy who tried to rescue his sister from the witches) California guy, his little sister and pretty girl fight to get rid of the sisters once and for all.

What I like about watching movies from childhood is that I can both remember how the movie made me feel when I first watched it (terrified) and how it makes me feel now (silly, delighted). I can also appreciate some of the elements in a whole new way. For example, Winifred’s (Bette Midler) Emperor-like ability to manipulate people with lightning that shoots out of her hands, the cat/boy getting totally flattened by a bus and then re-inflating, er, coming back to life, and the rousing musical number that leaves all the parents totally incapable of helping in this crisis (I Put a Spell on You).

Whether its Hocus Pocus or some other gem, I highly recommend revisiting a favorite childhood movie if only to laugh in wonder at how you could fall for such childish foolishness. And then maybe do it again. 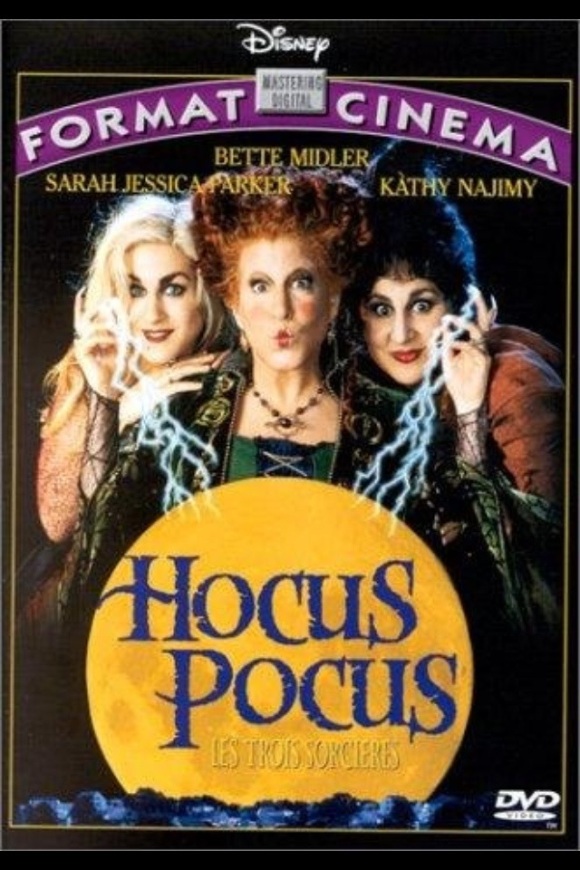